Everything Name Here Has the Letter "X" In It 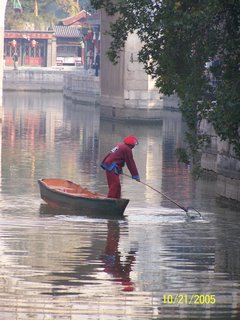 On a recent sunny Fall afternoon in the streets of Beijing, a young man made a keen observation that seems worth repeating. "Every phrase, restaurant, sign and street name here has an 'X' in it," the man said. That'll do pig, that'lldo.

Sitting here among the somewhat-lacking-in-grandeur buildings of Beijing I can't help but think to myself, "Self, what was this place like BEFORE they started 'fixing it up' for the Olympic Games 2008?" Truly this place is a world apart from Shanghai. The buildings are run-down, the people noticeably poorer, the pace slightly slower. And yet, we're still speaking about China. In a country of 1.3 billion people (most of them in cities), there are... well, a lot of Chinese people speaking Chinese. Also of note is that the people still seem generally wanting to help and aiming to please. Maybe it's the 100 Yuan bill talking (it's worth all of $12 USD but it stretches a loong way here) or maybe they actually want to help. Hard to tell but I'm taking the optimistic approach and picking the former. And where the city is 'older' than Shanghai at least there is culture within the city aside from shopping. We spent the morning and afternoon at the Emperor's (and Empress's more importantly) Summer Palace. An IMMENSE palatial estate that dwarfs any of the temples in Japan in size and scope but not in physical state (note: it IS under re-construction for the Olympics).

Identity-wise, this IS China. We're talking rows upon rows of restaurants and they all serve the same food (one guess for you what type of food it is). But that's not a bad thing. It's just China. And that speaks volumes when you see the people who move about this country daily. They are a world unto themselves. Seemingly trapped in a time-warp for 40 some-odd years and then suddenly thrust into the throws of westernized capitalism in the last 15. An odd mix of not-so-tantalizing and faded photos of "Shrimp with Black Bean" adorn the windows alongside miniature gadgets that claim to play MP3 and MP4. Given a 9% growth in their GDP annually, it would not surprise me if they have MP6 advertised before the rest of the "western" world.

I've sat amongst private family conversations in Lasaunne, Switzerland (before I learned French) where I understood not a word of the flowing French aroundme. I sat just 3 weeks ago in the lovely home of a Dutch family in Hardewijk, The Netherlands where the torrid (and frankly less than beautiful) sound of Dutch left me numb but smiling. And I've sat in many a business meeting listening to Japanese as though it were a bad mockery of Wierd Al Yankovick making light of Asian pop songs. But none of these language barriers are quite as foreign as Chinese. I'm struggling to pronounce the words "Thank You" (Xie Xie in transliteration) but I'm laughing all the way. Does English sound as foreign to the taxi driver as Chinese does to me? And if it does... well, what must he think of German?! And for the love of God, can somebody buy a consonant instead of a vowel? No wonder I can't pronounce anything.

Speaking of German, our hotel is flooded with them. I've come up with two possiblities:
1) There is a popular and timely sauerkraut and wurstli cook-off competition here in the coming days
2) Beijing is a popular tourist destination for Germans
3) A tour company booked a lot of Germans in this hotel

Lastly, massage here is cheap and abundant (more so in Shanghai but here too). Had a nice Thai massage last night at the hotel. Any society offering 60-minutes of massage for $35 is one that I need to return to.

Tomorrow it's the 'official' start of the tour. Up until now it's just been aplay-it-by-ear adventure. So that means Tiananmen Square and the like. Think it's time to go eat more Chinese food.
Posted by GP at 5:37 PM