An Ode to Breakfast, Sugar and Tasty Treats

I don't understand folks who don't or won't eat breakfast. This was't really an issue for me until I started eating breakfast in lieu of dinner (that is, I had breakfast at breakfast time but I also had what one might classify as breakfast at dinner time). My appreciation for breakfast food has grown 2x fold now, of course. Just this week I've had home-made pancakes twice (for dinner), eggs, cinnamon toast, etc. What's not to like?!

How can the general populous not want to consume something as tasty as eggs and salsa, pancakes, or sugary cereal? We're talking about 250,000,000 Americans of whom 35% are obese because they sit on their fat asses all day and eat candy and complain that exercise is too hard. But they won't eat a bowl of frosted flakes?!?

I mean hell, the health sites are all saying you should eat breakfast to lose weight. The cereal industry even changed the names of their cereal to make it sound more appealing to those poor sugar-fearing souls. Sugar Smacks became Honey Smacks. 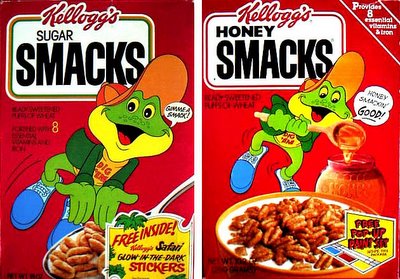 What the hell world do we live in? What's scary to me is that people are actually FOOLED! They think the cereal actually has less sugar in it or is better for you because the "Honey" version says it has 8 essential vitamins. For craps sake people, do you think some crazed magical bees came and put a special antioxidant pollen into your specific box of cereal? It's still sugar, it's still from Kellogg's, and it still tastes fucking great. Eat up America!

But lo and behold, that's NOT the only change in the cereal aisle. How about Post's brilliant marketing campaign to take the guy named SUGAR BEAR and change his pride and joy cereal, "Super Sugar Crisp" to "Golden Crisp". 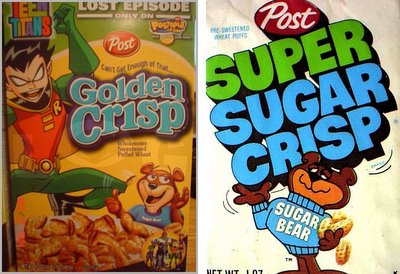 I'm not fooled. The Sunmaid raisin lady did not sanction this cereal with her special golden powers and the bear still looks like he's so jacked up on sugar he's ready for a few cases of the new Coffee-based Coke.

The question becomes: are the American people scared of breakfast because the sugar cereal characters are actually crazed lunatic ax-murderers? If so, why is it ok to feed the cereal to their children but not for themselves? Come on people, get with the program. Eat your sugary breakfast and be happy. Doesn't it beat starving until 10am and then giving in to that urge to eat a Snicker's bar?

But I stray from my original point. Breakfast is a necessity. Make some time in your day for 1 week straight to eat breakfast. Challenge yourself. Don't you feel better? Your metabolism gets going, the juices start flowing and the body comes alive. No need to skip that morning coffee if you're one of the millions of caffeine addicts out there.

If you're feeling really spunky, make yourself some scrambled eggs. It takes approximately 90 seconds longer than getting out a bowl, milk, spoon and cereal and tastes just as good. Toast up an english muffin. Even the frozen waffle section of the grocery store has some lucrative offerings these days. Blueberry, banana, even chocolate.

Really, if you're going to eat that donut at the office then why are you fretting about a chocolate Eggo?! As in all things, routine and moderation. If there's one thing I've learned in my 3+ decades on this planet it's that the Spaghetti Monster wants to help you. With his noodly appendage he has created breakfast and therefore you should take advantage of the fruits of His labor.
Posted by GP at 10:02 AM 1 comment: 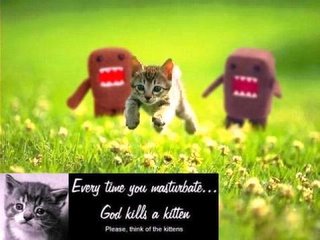 http://www.kittenwar.com
Posted by GP at 9:54 AM No comments:

eight To four Every Day 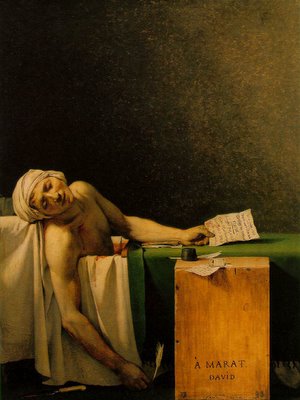 So am I used now?
a permanent scar
finding just bitter
in the sweetness of war
See we shot the wad
dumped the load
nothing but blanks
kissing the toad
damaged goods here
complacent and bored
brain's not thinking
the squash is gored
cockles and mussels
it's all up for sale
highest bidder
leaves the taste stale
so leave now please
before it gets bad
and the money goes too
with the sanity I had
you see I'm not really worthy
of those things you say
I'm as lazy as the next one
lately bored of play
all those smiles you flash
the sly-fox tooth grin
just makes me delay
a loss with a win
so call me a pessimist
that's given into fate
but i say i'm a optimist
who crashed the iron gate
i tried driving forward
tried 'making the best'
but all i'm now feeling
is i'm under house arrest
how long can i read
the stories of the world
and not be out living
becoming unfurled
it's been a great ride here
please don't get me wrong
but i'm not really grateful
i worked for this long
and don't look for thanks
or cheery goodbyes
or hopeful engagements
or false starts and tries
no, no, i'm done now
i've had quite enough
and i'm ready for life again
not this substitute stuff
i'm feeling quite sick
on a near daily basis
and it makes me sad
to review my current stasis
here i go now, here i go
i won't sit here anymore
i'm getting up and leaving
i'm opening up the door
i'm putting my first foot through
put back what i'd borrowed
and here goes the rest of me,
so... I'll see you tomorrow.
Posted by GP at 2:59 PM No comments:

An Open Letter to Those Who Cause Anxiety 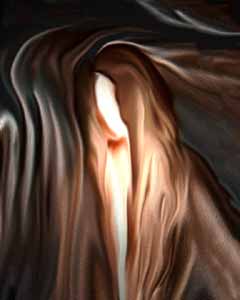 I have the following helpful suggestions for anyone out there who's judging anybody else. In no particular order:
Posted by GP at 8:40 AM

Observations Of A Day During Mad Mahattan's Hectic Holidays

More fur coats than you can imagine. More than a 1860's mountain-man trading post in western Oklahoma. More than a 1920's glorified movie. More than we, in sunny California, imagine that society has the gall to bare.

Rich, chocolate Godiva cocoa. Steaming in my hands as the snowflakes fall like frozen confetti. It's warmth surrounds me; my liquid-brown shield against the unfamiliar elements of winter.

Blue and black Sanford & Son t-shirt that wasn't in my size. It said, "You Big Dummy" and had Red Foxx's head on it.

Men in suits, men in street clothes, men in all forms of attire. And all trying to look so 'chic' by not wearing hats. Men without hats. It's 23 degrees, fellas, time to give up on the perfect hair.

Woman on the subway, jolly, happy, leans on the upright pole taking a break from a happy day in the big city. But that ass. It extends 5" out from her sacrum and leaning into the pole just accentuates its extreme size. And now another. A pudgy white woman with an ass the size of a small metropolis. What is it about Manhattan? As I sat in the office kitchen for breakfast she piled her plate with pasty. As I sat in the office kitchen for lunch she waddled in with McDonalds. As I walked through during the "2pm Snack Break" she was eating an ice cream sundae. It's not for lack of taste. What aspects of this life can we control and which aspects can we not?

Old woman with a red dress on the #3 Express train heading south. Flaming red dress, black wool coat, and a green hunting cap with animal fur ear flaps. And she looked regal. Ready for the cold of winter. Ready to walk 10 blocks from the subway down the frozen streets of Brooklyn. Ready for another evening in the city.

When I was assumed to be not paricularly bright recently it occured to me that all of us, in our professions, at some time or another, make an assumption that one of our fellow 'peers' is not the swiftest knife in the drawer. Sometimes those assumptions prove correct, but other times they are far from it.

On this particular occassion an instructor of a technical training course essentially ignored my pleas for help when a particular technology was not functioning correctly in a lab. Normally, I could see why he ignored me. After all, most of the time I'm sure that his students asking questions during lab are the same ones that are supposed to be 'computer professionals' but can't install Microsoft Word. But in this case, he was wrong. I've been fixing computers since I went to my Aunt and Uncle's house in 1987 and fixed their Mac 512ke. I'm a geek at heart and love the systems. So if something seems 'off' to me it's usually because it is. I'm not saying I'm always right. Far from it. Nor am I implying that I can fix every computer problem. But to say that I would take the time out of my day to say something is dead wrong when it's really not? Not bloody likely.

So the teacher eventually was proven wrong and a solution was found and the class moved forward. No harm, no foul. I certainly didn't blame him. But a few hours afterward I realize that the flaw is usually within the accuser. I know that I often make false assumptions about 'end-users' that I help. And I also happen to teach Yoga and make assumptions about a practitioner's ability to, say, concentrate on breath or be as strong as their minds have the capability to be. And often I'm proven wrong. Even more so, I'm usually the one with the 'fault'. Why just this morning after a solid yoga practice the prior afternoon I awoke and promptly stretched and yawned in such an idiotic manner that I pulled a major muscle in my back. And then this evening I had such a good practice, despite the pain, that I was the 'class demo'. Amazing.

Perhaps the answer is that some of us are wrong and some of us are right and some are skilled and some are not. And you know what? None of us is one of those all the time. We're fundamentally flawed and that's what makes life so wonderfully insane, painful, ecstatic and joyful every minute of every day. You just have to learn to smile when you stretch up your arm to answer the question you know you have the right answer to... and you pull your shoulder doing it. Maybe you've just pulled your brain.
Posted by GP at 8:14 PM No comments:

I think perhaps New Yorkers just don't understand how incredible it is that places like Veselka even exist, much less on every corner of New York's Village. In a world of bad diners and strip mall clubs it's amazing to visit NYC just to taste some of the thousands of privately-owned, tasty and unique restaurants.

Veselka is unique. A world unto itself serving "xmas borscht", kielbasa that's not greasy, beets, cabbage and pierogi's. And that's 1/20th of the menu. And then you can finish with your own personal pumpkin pie? Did I mention you can stuff yourself for about $15? Just kill me and send me to Ukrainian heaven!

Did I mention it all tastes good? This is a world where the 2nd Ave Deli is just steps away and people think nothing of it. Attention people of New York: visit the Olive Garden one day and then Subway the next. Then meditate on that for a while and smile at how fortunate you are! Everyone else: wag your tail and give 'em your best turned-head-glossy-eyed puppy look and see if you can earn a round-trip ticket to New York City.
Posted by GP at 7:53 PM No comments:

Put forth your best effort
and what do you get?