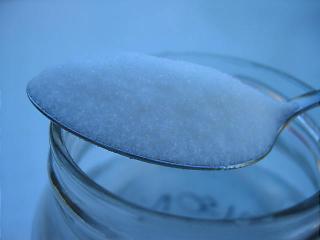 This past week I came to the conclusion that I needed to take a step back from my relationship with Sugar. And whereas I can't really relate to being addicted to heroin or even nicotine I think I now have an idea of what it's like to quit something cold turkey. It's awful and after the bloodstream is cleared it's wonderful.

We were a relationship gone sour: Sugar and I were meshing quite well together every time we initially got together; but over the course of a few hours I started to feel like crap and Sugar was feeling... consumed. The beginning of the end was about a week prior to our breakup. I realized I was seeing too much of Sugar and we didn't quite have the same feelings we used to. It seemed to be going downhill.

And then the big fall-out came. We were stuck together with nobody else around in the Oakland airport for the better part of 6 hrs. I had been thinking about buying a box of See's "Nuts and Chews" (1lb box mind you) and after about an hour of waiting I gave in. As always, Sugar and I had a sweet encounter at first. It was all melted chocolate joy. I even felt confident enough to share Sugar with some other folks in the airport. Now that's confidence in your relationship!

But alas, things went south just a few hours later. I felt ill, guilty; a gluttonous lethargy crept over my soul and I wanted to bury my head and cry for help at the same time. "Oh, Sugar, you'll be the death of me," I thought.

Now, I've been through my share of break-ups. But this one was tough. I told sugar we could talk from time to time. I don't believe that isolation is the key to anything except a good Buddhist meditation retreat. And so we took a few days off. And that became a few more. I often couldn't clear my head. I just drifted from dessert to nuts'n'chews and back again.

As with all good things that come to an end, the pain was lessened with the presence of old friends. Orange and Plum came along and helped me through my highs and lows and evened out the long hours between meals. The worst was after I ate. I was reminded of all the times Sugar and I had shared sweets together after eating. I laughed at the variety of life. I cried at the sadness of being alone. And finally I accepted my life as it was: Sugar-free but happy.

I've returned now from my trip abroad. No more airport-spent hours waiting like potholes of life needing to be filled. My house still has ice cream and there are still 4 boxes of girlscout cookies waiting to be consumed. But I've reached a point of balance once again. Sugar is still there. She always will be there even if just in my memory. But she's not the one in control of my life. She has her own families to deal with; children's mouths to feed; she's an artist with a world of blank powdery white canvas.

I suppose the moral of the story is that only you wake up in your body everyday. And you can treat it as a temple and only give it what's good with some sweet indulgence (as my sister-in-law says, "Moderation in all things including moderation") or you can fret and whine and try to fill an ever-deepening void with more and more emptiness (empty relationship, empty calories). In the end the lesson is quite simple, a cliche of the most overused sort: You are who you eat. So don't eat in desperation. Eat up and enjoy with control, dignity and understanding and you and your Sugar can live happily every after.
Posted by GP at 12:58 PM