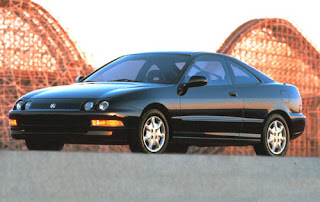 I drive a 1996 Acura Integra. His name is Dexter. He's Hunter Green. He has 175,000 miles on him, never been in the shop for a mechanical problem (knock on wood) and still gets me to and from work on the busiest freeway in the USA, 52 miles round-trip every day of the week. He's our sole source of transportation on the weekends because C has a company car that should be used for work-purposes only. I love Dexter.

Dexter's birthday is this month. I got him 13 years ago right after he was born at Euro Motorcars in Bethesda, MD. And yes, that means since I live in CA I got the opportunity to drive him across the country. But there's more to it than that.

A lot of shit happens in 13 years. Dexter has outlived over a dozen "relationships" and Lord knows how many dates I picked up with him idling nearby. He's outlived one marriage to see the blooming of a second. He's driven me to EVERY SINGLE FULL TIME JOB I HAVE EVER HAD SINCE GRADUATING COLLEGE. Yes. I know. Amazes me too.

He's lived in the city, the suburbs and in climates as diverse as swampy, humid and occasionally icy to dry, maritime-based foothills. He's lived over a mile high and right at sea level. He was neither tuned up for one or the other. He just runs. And runs. And runs.

This past week C's father (head mechanic at a local repair shop) helped me out by installing the SECOND timing belt and water pump Dexter's had. He also put some new struts on there. Yes, I wore down the struts on a Honda product -- and they were far from "shot" although they were weakening. I've been through 3 sets of tires with Dexter (approx 60k each set with a few punctures between).

There was an article on NPR recently where someone was discussing the changing car culture. That GM invented the concept of changing models annually to drive sales and how that may change as the landscape of auto-consumerism changes worldwide, especially in the USA. I am absolutely amazed that people would actually BUY a new car annually. What the hell for?

All told, I can't say I haven't had many thoughts about new cars over the years. Three years ago I researched and test drove some cars while visiting my Mom (it seemed like good Mother/Son bonding at the time but really I ended up driving 75% of them with a salesman while she sat in the dealership so it's not an activity I recommend, anyway, I digress). I've looked at convertibles and other Acura's. I've driven my brother's new Acura (his old car is an Integra, by the way; a 1993 model that also still runs like a champ, albeit with less mileage on it).

The sole reason I can think of to get a new car is safety. At the time I purchased Dexter he was as safe as can be. Dual air-bags, anti-lock brakes. Those were "state of the art" and started to become standard in the mid-90s. Fast forward. Now side-curtains, lane-departure warning systems, in-car GPS-based alert systems and back-up cameras are all normal features (and they all have dashes "-" in them as did the 90's features!?). There was a 60 Minutes show 3 years ago that I caught. It compared "Cars a Decade Later" and it was 1996 vs 2006. The safety changes were astounding. I immediately started researching. After all, the 405 freeway averages 78mph in the morning and afternoon commutes and I do not really have a death wish. But when it came down to it Dexter seemed perfectly adequate versus the small, fuel-efficient car I would have wanted anyway.

Dexter has been "rebuilt" twice. Once when I rear-ended an Avon Lady in a Pink Cadillac (yes, it's true!) in 2004 and once when someone hit me in a DC private parking lot in a rental car and left me the nicest note in the world. But he still looks tip-top. My neighbors used to make fun of me because I would be out washing Dexter almost every weekend. And I recall when I first started working that I'd always have a "proud" moment when I would fill his tank to the top and drive into the city (where I lived) for the weekend.

He is also better traveled than most Americans. I drove him from the east coast to Colorado and back twice. And to California as mentioned earlier. He's been to Northern CA and down to San Diego on the left-coast. On the right coast he's been to the TOP of Maine (think Canada border tippy top) and as far south as North Carolina. And everywhere between down South. He's been camping at the Grand Canyon, driven across the length of Texas, revved over a railroad tie in a concert parking lot outside a dark amphitheater (not bad for a ~12" clearance on a sporty car), rear-ended the Avon Lady (I know I mentioned that but in retrospect it's pretty amusing), shuttled my entire family to all sorts of places and provided me with freedom to be me even in Southern CA, land of the car culture. I've hauled furniture with his fold-down seats and giant hatch, driven through blizzards on ski trips (he does NOT like ice so I don't feed him that often). I've taken apart his entire front panel, installed "new feature" stereos for my iPod and even replaced his speakers, tail-lights, etc. Anything that's efficient and provides comfort. I'm not one for bling or "upgrades" to my Integra although it's a popular SoCal past-time with certain cultures.

For the past 7 years he's been garage-kept and he will continue to be until he retires. I don't know if I'll ever trade him in. I think his blue book is under $2k. The last time he was rebuilt in 2004 the insurance company was wavering whether his blue book was worth more than the damages. We scraped by that time. No, I think I'll drive him into the ground at some point, even if he's a 2nd vehicle. And that's that. I have no point. I just love my car and most people don't love theirs. Sucks for them. Choose more wisely next time. You'll be glad you did; even 13 years later.
Posted by GP at 1:11 PM

I heard that NPR story too! I've had a myriad of cars in the last 10 years: a toyota 4-runner, a leased VW Jetta because now there were two of us, a used Toyota Echo to replace the Jetta, a Saturn Vue to replace the 4-Runner and now a Mazda5 to replace the Vue. With the Mazda5 it was an opportunity to have decent (I bet not as good as yours) gas mileage and! have 6 people in my car, I had to take it. As sad as it is to say, I understand why suburban moms have minivans. I drove one as a rental years ago and it was like riding on a cloud. But the gas mileage is hideous.

I think part of the new car thing is that it became okay to owe on your car. Either part of that story or another one I heard one person say "we used to be a company that sold cars that occasionally loaned money to customers and now we're a bank that sells cars."

We're hoping not to be in the market for another car for many years. The Echo is a great commuter car, right now it only goes to the bus depot and my car can haul people and dogs and things. We're fore-seeing many family road trips in the Mazda5.

You should have used of picture of you all sudsy washing your car :)

1990 Acura Legend. So much that I hope to never have to buy another car. I bought my car for its dependablility and maintenance record. All I can say is IT WORKS!!

Dexter and his brethren rule!!! Unfortunately I'm not sure the Japanese cars are even built like they used to be.

I own Dexter's sister, a red 1996 Integra...bought it for myself as a 25th birthday present, and I'm still driving it. Made it through the infant seat, the rear facing toddler seat (THAT almost made me buy a 4-door) and now we're forward facing (phew)...mine has also driven to the East Coast and back (from Colorado) a couple of times...and has been hit/rebuilt twice as well. These are amazing cars. We have a Jetta that is only 5 years old and we've spent at least 20x as much money fixing it as the Acura. People think I'm nuts to still be driving this old car, but it's the best purchase I ever made.