The Freedom to Go 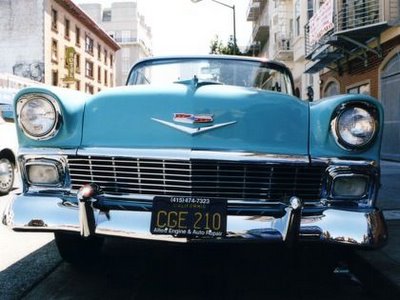 It's a funny feeling I get when I have a full tank of gas in my car. I'm not much of a car guy but I know the models and usually engage in some typical watercooler conversation with the more 'car savvy' native Californian's in my office. Keep in mind I work in IT. That means two things: mostly men and toys.

But I don't believe it's my 10+ years in the IT field that gives me the all-consuming feeling of freedom when I gas up. I get a simlar feeling, actually, when I fill the air in the tires of my bicycle but not quite to the same extent. The feeling is one of convenience. As though I've just worked hard to earn the $25 that allows me to go whereever the hell I please. Maybe it's some form of American-ized super-ego Free to Be, You and Me attitude of a Generation X'er who spends hours dreaming of retirement. Or maybe it's the movies, magazines and posters that make me yearn for the freedom of the open road.

It's probably a little of both: hard work earning freedom and the American spirit. Somehow I don't think the Bedouins in the Egyptian desert are dreaming of the open road so they can fill their camels with water and ride off into the sunset. It's obviously some form of cultural absurdity that I usually try to avoid like the plague. And you know something? I don't really care. The feeling doesn't hurt anyone and it makes me feel good! At least I'm not driving a Hummer and I'm not driving a pollution machine.

So I've been socialized in some way to like the automobile. In Southern CA I have seen a lot worse than socialization. Interestingly, however, the feeling doesn't come on every time I fill-er'up. It usually happens on a day when I've actually washed my car (myself, by hand, not hiring Mexican illegals to do the job) and take some pride in several facts of life:
a) I am free
b) I am self-supportive
c) Nobody's foolish antics, attitude or lack of integrity can steal that
d) I'm gainfully employed
e) My net worth is approximately 99% higher than most of the world at large

As I look at the price of a gallon of gas under the long reign of terror known as the Oil Tycoon Presidency I have to wonder how good we still have it? Have you ever thought about the above list and compared your life against this list:
a) I'm free because I was born here and had good fortune not to be sold to a white slave trader on a family vacation to Trinidad
b) Chinese laborers die for my lifestyle; I support only capitalistic tendencies
c) I'm a weakling in a world of bears -- truly those with nothing to lose are those who can't have anything stolen so shouldn't we give it all away?
d) I work in a modernized slave quarters; at least on Jefferson's plantation I'd get some fresh air and get laid by the President (ok, that's offensive but I'm leaving it in there)
e) Yah, I'm richer than an AIDS patient in Kenya but one drive on PCH in Malibu makes me want to take a shit on the lawn of a few 'inheritance' victims.

That's just an alternate view. In some honest soul searching I definitely lean toward the former list as the latter is awfully self-pitying and that's just pathetic. If you have everything and still complain... well, you need to be taken out back and dealt with. If you have money and want more then you're American.

Just as an example of the illness surrounding us despite our freedom, take a hypothetical. Jane earns $100. She spends $20 on gas to drive her new car that costs $40 in monthly payments. She has $40 leftover and really wants to go party with her friends. But she expects that because her friend Janet made $200 last week that she'll buy drinks. And you know something, if she has good friends maybe Janet WILL buy a round. But Jane if you expect Janet to pay... well, why? If Janet knew she should tell you to go fuck yourself. Jane, you're American. You want more money? You go get 'em honey. But if Janet has more you're not entitled to any. Not a loan, not a free ride, not even a drink. It's your SOUL that will get you that drink. Your essence. Your being. Your personality. Your karma. Some transcendental energy in this world that makes your being benefit because it's inherently good. Expectation of care is not means for kismet. It's means for somebody driving by in a nicer car and giving you the finger. Oh Janet, you need to find the Buddha and learn why you tend toward the more pitying souls in this world.

But I digress. Complain though we may about the price of gas (still HALF that of Europe), all the while driving Ferrari's and Hummers around, I have to note we still have it pretty sweet. The reality is that I don't drive a camel (which isn't to say I don't have experience doing so). My car is 10 years old but it's in beautiful shape, runs like a champ. I have the ability & opportunity to drive something manufactured in Japan where they care about quality because I live in a country where we can import foreign goods. That's pretty unique. That's pretty amazing. That's pretty great.

Though this is a blog and I may or may not have a point herein (that's for you, my dear Reader, to decide), I feel that our freedoms are so taken for granted it's no wonder there's a Jihad across the planet. So the next time you are stuck in traffic, burning gas at $2.69/gallon and cursing the 'crumbling infrastructure' in America's cities do a Google Image search on Haiti, Iraq or Sudan & the word "violence". And then go out to your oversized truck or sedan and think how freakin' lucky you are just to be alive today. Because the reality is that you got lucky. You were born in a country where you're more liable to die from over-eating (in the ole' days it was called the sin of gluttony folks) than from a bullet through the head shot by a 14-year-old uneducated child trying to be a civil war hero.

Drive safe. Enjoy the freedom of the open road. And wipe that grimace off your face when you see the gas prices.

Postscript: What the hell does "Support Our Troops" mean? Wouldn't the best support be bringing them home so they can get a job and drive on the open road too?!
Posted by GP at 3:39 PM